Home for three days together - a marvel. Louis and I have successfully achieved very little. Mainly laundry and a slight improvement in health. There have been some epically long naps.

The first day we stayed home proper. We did not venture beyond the front door at all. Luuk got groceries, in his lunch hour, just so I didn't need to take Louis and his cough to the supermarket. Meanwhile, Louis and I watched television, read our way through all of his books, and raided the kitchen. Feed a cold, right? Louis had some making-up to do do after his appetite-less weekend. I was feeling tired and lazy. Did a blog post and a couple of loads of laundry but couldn't even be bothered cooking dinner. Luuk got stuck in phenomenal traffic but picked up pizzas - so we had take-aways, but late, and didn't do a french lesson. 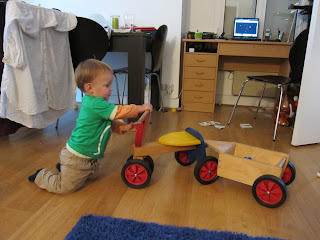 Playing with new toys. Who says there's a right way to do it?
(Also in this photo: laundry)

The second day we ventured outside. Antony has a market, three days a week, and I like to buy our fresh fruit and veggies there. I also had enough motivational oomph to make Louis some veggie soup (stocking the freezer with baby food seems wise when a new baby and sleepless nights are impending) and do some laundry.

Unfortunately, I pulled the dirty laundry straight from our luggage and somehow a used (lightly, thank God) nappy got into the washing! Fluff from the inside was through all the clothes. So I had to shake it all out and then clean up that disgusting mess. Was already worn out but after that just wanted to curl up on the couch. Of course, Louis woke up around then. But he was angelic. He's still not well and the low energy levels seem to make him content to play by himself, or at least with me, while requiring very little movement/energy from me. 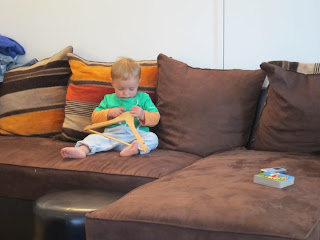 This kept him entertained for ages - hooking the hook into his t-shirt neck and then getting it out again...

We had deliveries - always exciting - and are now much more prepared for the arrival of baby number two, whenever she should decide to come. The new car seat capsule arrived in the morning and while I was out shopping I got some newborn size nappies! Still have no pink clothes, but plenty of newborn size stuff from Louis' infancy.

My favourite bakery is closed on Thursdays, something I'm afraid I moan about far too much considering how many other bakeries I could walk to easily... except that there's nothing easy about walking when you're seven and a half months pregnant. Anyway, yesterday afternoon I was such a pregnancy cliche: I was craving snickers bars and cheese. I had cheese, but no snickers. Louis was napping, so there was no popping down to the shops (though this far through pregnancy you just can't pop anywhere.) 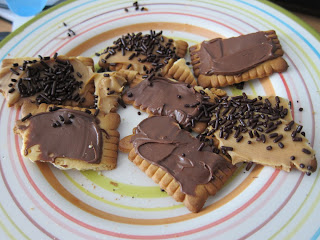 The weather improved in the later afternoon, which improved my mood, but not my energy levels. In my pregnancy with Louis,  I was super achey at this point, all around my hips - probably to do with being stretched out from the inside... I haven't been as bad this time around but it is starting. 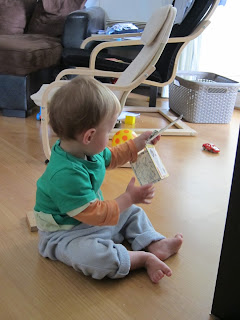 Louis was good enough to entertain himself while I relaxed. He's been well-entertained by this free hand-out from the Singapore Airlines crew... still keeps him busy three months after he was given it! It is now torn into several smaller pieces and we've only kept a couple of the big bits.

Today there was no shopping list to force me out of doors, but I did have bakery dreams for myself and sandpit dreams for Louis. It dawned beautifully but Louis took AGES to go to sleep at his morning nap time, and when he finally did I couldn't bear to wake him. When he did wake the weather had packed in. I bundled him up and we headed out, hoping to catch a good half-hour in the playground before the rain arrived. But the rain arrived while we were in the elevator.

So we dashed to the bakery and back, had lunch, and then played at home. Louis had a go at walking again. Inspired, I took him on a walk down to the basement, to dump the rubbish. He's lacks confidence to walk without holding onto us/furniture. Holding onto one paltry finger he walks confidently and barely relies on my hand at all. Now to convince him he doesn't need to hold on...

It's the weekend - yay! Very little planned - Luuk wants to find himself a bike which will mean a trip into Paris, for him at least. This place needs sweeping badly. I don't think I'll manage both the RER and the broom in one day. Hang on to the edge of your seats, folks, and I'll let you know which way the cookie crumbles.
Posted by Amy at 7:39 AM