Oh, I had quite the list today. Only just made it home. Then, while eating lunch posted on facebook 'yeesh. wore myself out' and an hour later I realised I'd posted it not on my own feed but on a group page.  Oops. Evidence of overdoing it, perhaps.

The list doesn't look very impressive, but here it is:
- make hair appointment
- buy bagels (frozen food shop)
- buy other few groceries + special ingredients for dinner
- laundry (yep, every freaking day)
- get children's books from library
- get bread from bakery
- put rubbish in basement
- put boxes in 'cave'
- write. Something. (Yes, I suppose, this counts, but it's not really what I meant.)

I haven't had my hair done since we got to France and it's looking pretty awful. My light brown natural colour looks rather dull against the grown-out darker brown I had done in January, in Christchurch. Or was it December? I forget. Anyway, at a glance, I have greying temples. I've checked and there's no grey, but it's not a great look, at 27 years. Add to that some serious split ends and a well-grown-out layering... ick. But I haven't got a hairdresser to go to yet, so there was research to be done. There are a couple of fancy salons on the main street and I stopped in for quotes.

'Combien pour de me teindre, et de coupe, pour moi?' I held out my pony-tail to show how long my hair was. (It's usually more expensive than the standard colour price.)

Both places printed me a receipt and off I went, after stuttering out something like,
'Je pense and je retourner plus tard.' (I think and I return later... in terrible french, I suspect.)
Not part of the planned script, but hey, I was understood. They even held the door so I could maneuver my ginormous self, as well as Louis in the pushchair, out of the door.

Horrified by the prices (over 100 Euros) I did a quick search on my phone to see if there were other hair places nearby. Went to three more. The third was the cheapest at 67.50E so I made the appointment then and there, rather than waiting and having to do it over the phone - always challenging across a language barrier. 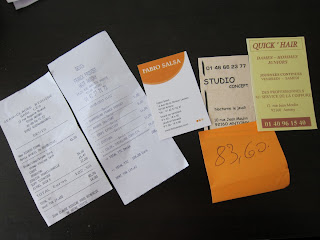 The salon is just a few doors down from the frozen food shop. I was questioning he wisdom of getting anything as would have to go straight home. Need baby food options as having a nightly nightmare getting Louis to eat nutritious dinners. But that'll have to wait till another day. Got the bagels I really wanted - doesn't matter if they defrost a bit - and left. Miraculous. I wonder if anyone has ever been into Picard and bought just one thing before? Helped that I didn't walk through the shop, just ducked past the checkout and bee-lined for the breads, which are second to last. Almost caved and got ice cream, the last thing before the checkout, but I'd already promised Louis a library visit. Sorry, Luuk, no ice cream tonight, again.

We got the other groceries, then I realised, at the checkout, that I'd forgotten the crackers. Essential? Well, you'd think not, but I am going to try a couple of recipes tonight and one actually calls for 'Ritz crackers'... and I haven't seen, them or anything similar, since arriving in France...

But there's no way I was taking groceries off the conveyor and heading back up the aisles to the pathetic cracker selection... so I stopped in at the Boucherie on the way home and grabbed a bag of chips from their gourmet food section. Expensive? Yes. But they'll do the job. And as the recipe won't require the whole bag, I get to have a yummy late afternoon snack. 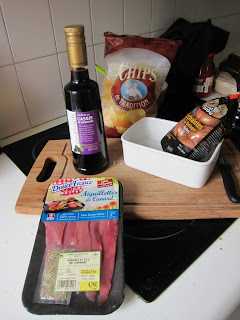 Some of my purchases for dinner.
Luuk got the duck a when he shopped on Monday...
and I found a recipe that requires shallots and creme de cassis:
http://www.foodnetwork.com/recipes/the-surreal-gourmet/pan-seared-duck-breast-with-cassis-compote-recipe/index.html

My second recipe is something I saw on pinterest. The small baking dish and the chips are for this:
http://www.kraftrecipes.com/recipes/cheesy-buttery-puff-122860.aspx

Cheesy buttery puff. Sounds so divine. And naughty.
Serving size is 6 people. In attempt not to be quite so naughty I went and got a smaller baking dish and will be doing a half-recipe.

Next stop, Library. Had to be escorted by a staff member in order to be allowed to use the elevator (I'll leave my terrible impromptu french up to your imagination) but found the children's book section and let loose a very happy Louis. He picked out several board books and could have spent ages longer... but I was hungry and growing very weary. 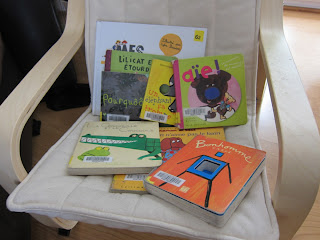 Yay! Something new to read. I'm so sick of our meager Hairy Maclary selection and The Three Little Pigs. All these new books are in French - educational for me as well as Louis!

Last stop, bakery. Got my baguette and pain au chocolat and headed, oh-so-wearily home. Fortunately, did the laundry and rubbish before I left. Don't think much more is going to happen this afternoon. I have a good book and it's highly likely that even such gripping fiction will not keep me from napping. The boxes can go to the cave another day.
Posted by Amy at 12:59 AM