Another day, another president.

We can't vote here, so we had a very a-political election day. Luuk made crepes for breakfast. So good with lemon and sugar. 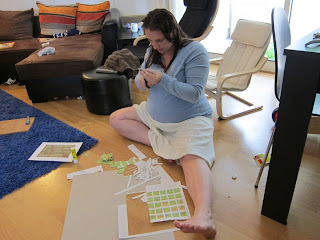 We put together a home-made version of 'Carcasonne' and then played it a few times. 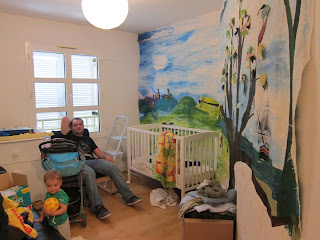 We put up Louis' mural in his bedroom, and then Luuk went out for more velcro sticky things so that we could put up the last corner and fasten the bottom edge.

More board games and tv, thus passed the afternoon. As per usual on a Sunday afternoon, we dragged Louis out of bed and forced food into him before heading off to church. The first sunday of the month means no kids program... which means entertaining Louis with food and toys, and trying to judge whether it is more or less distracting to other congregants if he reigns free or if we try restraining him. Tough call.

Speaking of judgement calls... it is election night and Francois Hollande is delivering his victory speech. Change begins now!

Today's dialogue for the 100 Days Project:

Man buying wine from a Caviste: (something I missed in fast, complex french...)
Me: Pardon, je ne comprends pas. Je parle un peu le francais.
(Sorry, I don't understand. I speak a little French.)
Man: Vous parlez anglais?
(You speak English?)
Me: Oui
Man: I said we will decide tomorrow, Sarko or Hollande. I will wake up in the morning, and then decide.


I'm not sure if he was serious or not. I suspect few would be so uncertain/decided but perhaps I am misunderstanding - it wouldn't be the first/only thing! We did drive past a guy waving his arms and yelling out in celebration on our way home. We asked the men in the Caviste who they thought would win. The Caviste told us that France is historically right-leaning, but that many people are hungry. In my meagre understanding, economic recession tends to push politics to the right, and yet in the 30s it was NZ's first Labour Government that pulled the country out of the hole. Perhaps (or certainly) I cannot safely generalise about these things, but I am curious to see how this will all play out. The focus of every debate is Europe and the economy. In my head Europe is such a big part of the world and yet they make up such a tiny part of a map on a globe. In NZ it is out of place, perhaps, to value Europe over other parts of the world, but here it makes sense. France's prosperity is entirely wrapped up with Europe. And the other way round - France has a responsibility, I guess. Their election is significant to the rest of the world in a way NZ's never is. And it is significant to a lot more people - even only within the country. NZers tend to have a little over-inflated idea of their own importance in the world but I wonder if our tiny-ness isn't a blessing.

Anyway, rant/monologue/indulgence over. Sunday night has started on a trend toward being Chinese take-aways night. During dinner we put on the Election coverage. This is how Louis felt about it... 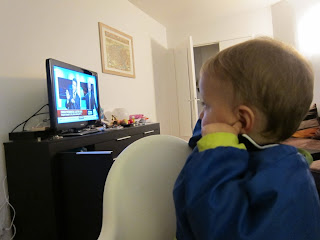 I suspect he doesn't much like the sound of arguing.