May is a beloved month in France; there's a holiday every week! Last week it was May Day, or Labour Day, and later in the month we have ascension and pentecost... and days off work to go with them! This seems so strange given how secular the country is, but hey, I'm not complaining. It's lovely having Luuk home, and not just cause I can nap when Louis is awake.

I often have trouble sleeping and it is partly because eczema plagues my skin, and in my sleepiness I struggle to be self-controlled and sensible, taking the steps I know will generally help/stop the itchiness. I have found a remedy that helps me to nod off - montmorency cherry, also known as tart cherry, capsules. Problem is, if I wake at 3am (inevitable when I baby is using your bladder as a neck pillow) I sometimes struggle to go back to sleep. This morning was one of those mornings. At around four I got something to eat. At around five I got in the shower, then applied a fresh lot of moisturizer and put on a fresh p.j. top... and still didn't go to sleep.

So when Louis woke at ten to six I volunteered for the first shift. Luuk usually does this, angel that he is, and lets me sleep in a tad. Luuk is a morning person, and is often awake from just after six with or without the help of our charming toddler. After being awake for a couple of hours in the middle of the night, I often get my best sleep from five onward. So it's a wonderful routine most mornings: Luuk feeds the rascal breakfast and keeps him entertained until I emerge, or if I'm tardy, they come and get me...

This morning Louis and I ate, watched TV, and read until just after seven when Luuk emerged. Much as I was enjoying my book, I know an opportunity when I see one, and I headed back to bed; woke just after nine. Louis was down for his morning nap and we were due at coffee/play group at 9.30...

We were late, but it was great to catch up with everyone after several weeks apart (due to all our travels, and last week due to our cold/cough thing). 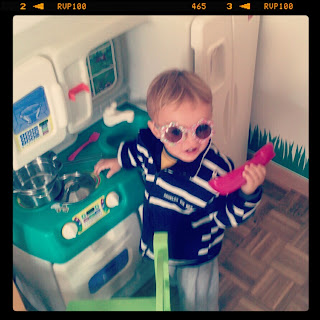 Earlier he'd matched the flower-glasses with a shiny blue beaded necklace - looked like a miniature, less-sparkly Elton John. Later in the morning the shiny blue necklace was replaced by strings of sparkly orange and green beads. No need to force gender stereotypes on him - society will do that just fine with or without my ruining his fun.

Came home and put my feet up while the boys walked up to the bakery for some supplies. Then lunch and Louis' naptime. Luuk and I read, then did a french lesson (that's right: we rock) and rewarded ourselves: ate delicious treats from bakery and watched the season finale of 'Castle' (oh my gosh! I'm a hopeless fan.)

We lazed and lolled, in true jour férié style, then when Louis woke took an impromptu 'must get out of the house' walk to a nearby park we've not been to before. 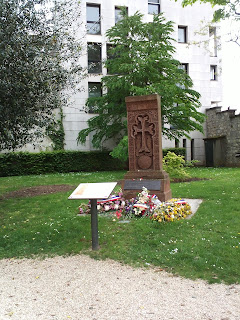 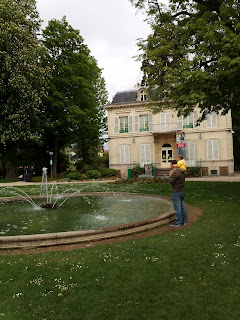 Flowers on a war memorial - that's right, VE day! And a fountain/chateau combo - must be in France.

Louis played with the stones on the path beside the playground, then played with his ball briefly before choosing someone else's Hello Kitty ball instead. The kids shared pretty well: I was impressed. There were loads of people at the park for six in the evening - kids running around, adults on park benches more/less actively supervising, talking...

Luuk had spotted another un-visited park nearby when browsing google maps earlier today, so we utilized the handy-dandy map function on my phone and walked home via another park - no chateau or fountain at this one, but there are a few cool sculptures, and it is also an arboretum, with plaques beside all the trees. I was running out of steam so we kind of went right past everything, though not very quickly... it's hard to say if it was my pace or Louis' that were slower. He walked most of the way holding one of my fingers in his left hand and one of Luuk's in his right.

Little trooper did the last leg with only Luuk for support, stopping to explore the cobblestones, plants and fence posts along the way. 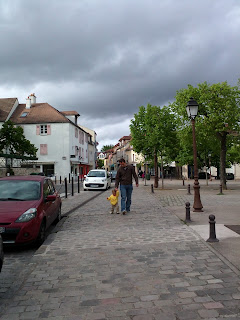 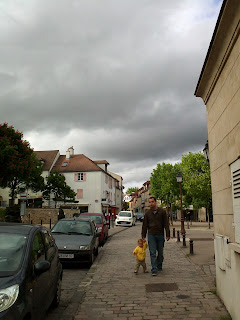 Off home for dinner (oh the drama, I'll spare you) and some rest for the legs.

Back to work tomorrow:


For Luuk: network superhero stuff.
For Me: writing my novel to keep from mopping the floors.
For Louis: mastering this walking thing.
Posted by Amy at 6:53 AM